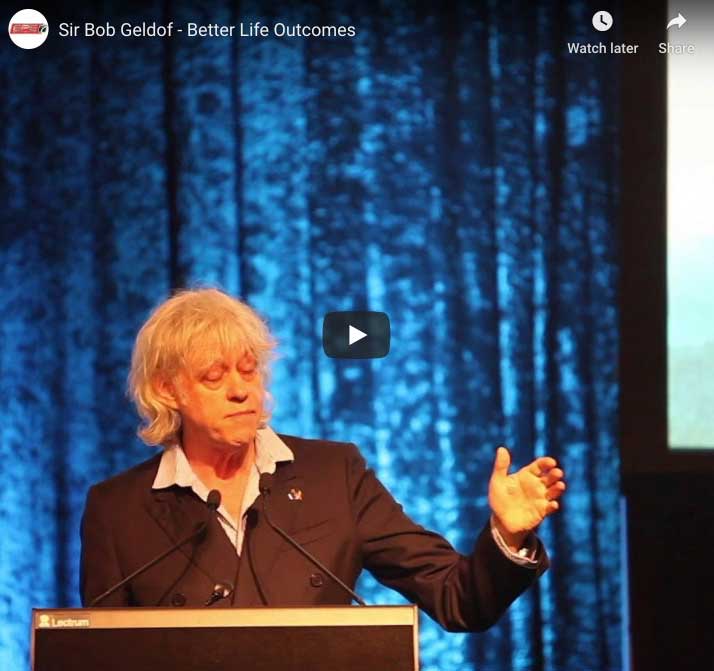 Activist, philanthropist and musician Sir Bob Geldof was in Perth on Friday (8 March 2019) to help celebrate World Plumbing Day, which takes place on 11 March every year and to launch a life changing project to deliver sustainable plumbing and sanitation solutions to remote communities around Australia.

In his typically irreverent style, Sir Bob began with a barrage of toilet humour before turning his attention to the serious and vital role that plumbing and sanitation had to play in delivering better health, economic and environmental outcomes globally.

“Nearly every civilization since it sprang up has tried to do what you do, which is to create sanitation and healthy conditions for society to function within,” Sir Bob said.

“And yet today, poor sanitation is the cause of more than 1,200 deaths of children under five per day. To put that in perspective, that’s more than AIDS, TB and malaria combined.

“The lack of effective sanitation costs the world an estimated $223 billion every year – every dollar spent on sanitation provides at least $5 in economic return.

“Now apply that to some of the remote communities here and even if you don’t measure the pure economic return in terms of GDP but in terms of human value, it’s extreme.”

Sir Bob, the driving force behind the global Live Aid movement, told the 300 attendees that as an industry, plumbers had the power to not only change lives in Australia but globally.

“I put it to you that with the ingenuity in this room alone, with the organisational structure that you’ve got here, why aren’t the Aussies delivering inventions, re-imaginings of what sanitation must be, if we are to stop the collapse of communities and cities?

“The consequences of what you do on a daily basis could radically alter how we manage not just the structures of a society but of the entire global environmental system.”

The Better Life Outcomes program, which has former AFL star and indigenous advocate Michael Long as its ambassador, aims to deliver a sustainable, repeatable model of plumbing installation and maintenance to remote communities around the country.

Master Plumbers and Gasfitters Association of WA CEO Murray Thomas said it was time for industry and government to take a collaborative approach to delivering long-term outcomes after numerous initiatives had failed over the years.

“We need to get away from expensive band-aid measures currently in place to address issues affecting remote communities and investigate and implement improvements that are sustainable and self-manageable,” Mr Thomas said.

“That includes a new approach to education and training, and in particular the development of more flexible and culturally appropriate apprenticeship programs.

“These are services that must be permanently available within communities and can offer long-term employment opportunities for Aboriginal people.”

The Better Life Outcomes program will commence with pilots being run at communities in WA’s Kimberley region and in regional Victoria. The pilots will include an audit of current infrastructure and availability of maintenance services, followed by a full needs analysis, cost modelling and training.